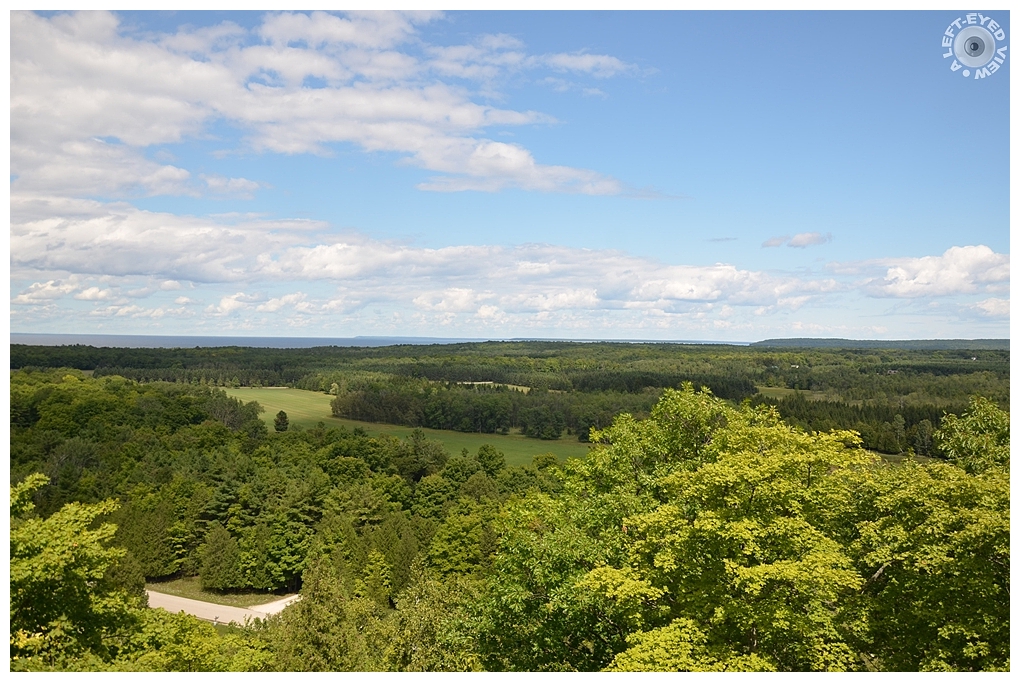 Posted by Steven (Chicagoland, United States) on 24 November 2020 in Landscape & Rural and Portfolio.

After making the ascent up the 186 steps just to get to the Lookout Tower on Washington Island, I was terribly disappointed that there were no views to be seen as the surrounding terrain was thick with tons of trees. The lookout tower was just a few feet away from the steps that I ascended and to my surprise, I had seen a father and his son descending the lookout tower. His wife was at the base of the tower, apparently acting as a "lookout" while they were on the tower. The father said to me that the tower seemed to be OK structurally and that if there were numerous people on the tower, perhaps that would be a different story.

The woman told me that she would give me a yodel if people (or park ranger) were approaching the tower if I wanted to go up. The tower had a 2 x 10 nailed across the base of the stairs and I crawled underneath and ascended the stairs to the top of the tower. After getting up to the top, I felt exposed and that I might be seen by park rangers at the top. So I quickly took a series of photos and then descended. As you can see in the bottom corner, there is a road there and I feared I might be spotted. It would have been nice to see this view in the autumn months.

OH YAY!!! You did get to go all the way up - and what a wonderful view... you were rewarded for your courage!!

Very nice composition. I really like all the shades of green you can see on this beautiful landscape.

Great image, Steven. And you did so much to gain access. Very dedicated.

A beautiful green space that continues to grow. A cool feature here.

You experienced a little adventure. That landscape is nice looking to watch and the story fits well with the spirit of Tuesday.

I can feel the silence in this…

A great landscape photo from above and yes I see the way downstairs .

Beautiful view and at least you can see far away and you’ve photographed some very pretty greens.

Worth the risk. :) Well done and a great view

Is it a dangerous place to ascend up ?

@Hiro: After the ascent up the first 186 steps just to get to the tower, I had to climb an additional 48 steps up the tower to get this view. It wasn't dangerous, but the height was incredible. Kept me cognizant of the warning about the tower's structural integrity.

That is what I would call a long view! Worth the climb!

Beautiful landscape and lush green all around. And lovely sky. Excellent composition. :)

A lush and lovely long view

The marvelous landscape view from this tower.

Nice view over a lovely landscape

A beautiful image from up top. It would have been lovely as the leaves turned color in autumn.

It gives a really nice view. I like that right angle in the road s. It makes it look very mysterious.

@Michael Rawluk: I wanted to keep the road in the composition to go along with my narrative as I was looking out for park rangers who may see me on the tower, where I wasn't supposed to be.

What a gorgeous view!!!

that one small "L" of pavement near the lower left is almost the only sign of civilization. So nature is your view. Besides, you have to have some payoff for 186 steps!

It is a beautiful view and I agree, it probably would be spectacular in autumn. I would also feel like I would be standing up there fully exposed!

That's a lot of steps brother, I think these kind of climbs are now beyond me ... but what a view!

With so much uphill, even I got tired.
:-P
Superb view, beautiful composition!