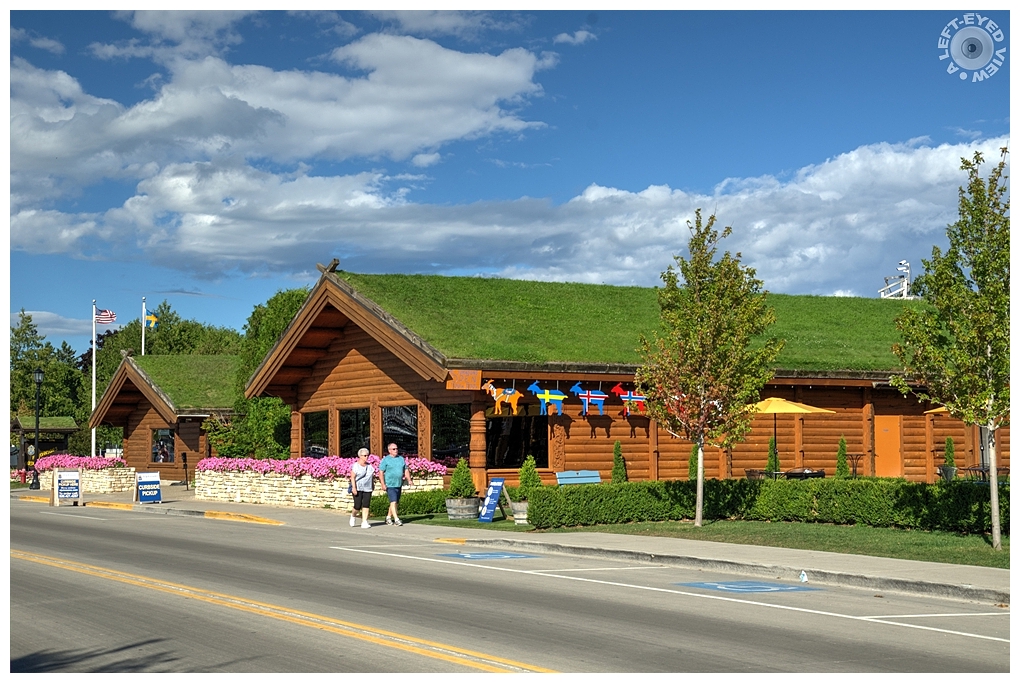 Posted by Steven (Chicagoland, United States) on 30 November 2020 in Food & Cuisine and Portfolio.

Al Johnson's Swedish Restaurant is a family-owned, casual dining restaurant in Sister Bay, Wisconsin. It is known for its Swedish cuisine and Scandinavian experience, as well as for the goats that live on its roof. In 1949, Al Johnson, the owner, opened a restaurant that he called Al's Home Cooking. In 1973, Al Johnson renovated the restaurant by importing wooden logs from a building in Norway and added a sod roof. Al's wife, Ingert, changed the interior to a more traditional Scandinavian design, and she added a gift shop called the Butik as a time filler for restaurant patrons waiting to be seated. After the renovation was complete, a friend gave Johnson a goat named Oscar as a joke, and someone decided to put Oscar on the roof as a joke. He later caught the attention of pedestrians, and inspired Al to obtain additional goats and put them on the roof. In 1996, the Johnsons registered the "Goats on the Roof" trademark, so that other restaurants in the United States can't have goats on their roofs. This day, goats weren't on the roof. But the restaurant's roof is equipped with goat cams for those who don't want to miss the opportunity. You can see the cameras toward the right side of the roof.

Oh, how fun, Steven. Too bad the goats weren't grazing but maybe the next time?!

This is quite an amazing story, Steven

A superb look at this restaurant. I bet the food is good there.

Nice capture and fascinating back story. I have seen goats on a roof of a shack in Canada and it does seems a shame that other restaurants can't take advantage of this ecologically sound idea, but I guess there is still scope for sheep :)

What a nice history behind this restaurant!!
The interiors must be as great as hat roof!!!
The food must be really great too!!
Lovely image !

Interesting restaurant. Thak you of info

Ha ha, what a great idea of goats on the roof. I like those colorful goats, too.

What a great idea, one I never would have dreamed up.

What a fun idea to have goats on the roof, and to even have a goat cam. Fun shot and info.

It looks like a very inviting place and to have goats on the roof is a real extra! I would love to see that! A beautiful view of the restaurant. I hope that you got to eat there.

Well that's all just wonderful, Steven! I really love places like this that celebrate heritage!

That's really interesting. Where I live, the village 'behind' us has sod roofs and we also have goats on the roof. It's a year round tourist attraction. In the summer, it's mayhem getting in and out of there. I'm always amazed at how many people want to see them, though it really is unique. I loved learning about the goats on the roof in the USA. Very interesting -- thanks.

so the goats actually go up there, huh? how intringing.

Goats want height and sloping terrain. To have a roof like this, for them it must be wonderful.
:-D

Interesting restaurant and thank you by sharing knowledge and history.