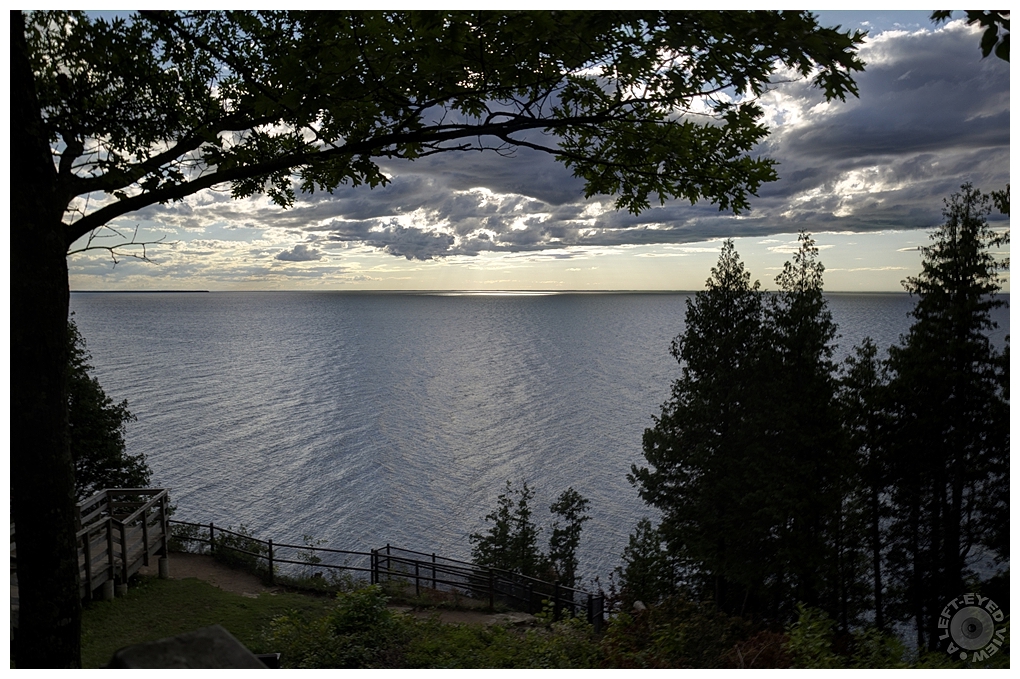 Posted by Steven (Chicagoland, United States) on 9 December 2020 in Landscape & Rural and Portfolio.

Ellison Bluff features a densely wooded two-tiered rock terrace -- part of the larger Niagara Escarpment rock formation that stretches and winds though the site providing spectacular views from the bluff tops. Extending from New York, into Wisconsin and forming the Door Peninsula, the limestone-capped Niagara Escarpment was formed through sediment deposition of inland seas more than 425 million years ago and contains fossil-rich sedimentary bedrock. Over time, the soft rocks under a more resistant limestone cap wear away leaving bluffs, which rise 200 feet above the Bay's shore.

Ellison Bluff is owned by Door County and was designated a State Natural Area in 2002.

You can really see why it's a tourist area, Steven!

Interesting inf of this landscape.

What a beautiful view on the sea with this spotlight ;-0

This is a great and calming scene Steven. 5*

Lovely light, though it looks cool for August, Steven (you are going to tell me it was hot!)

@lisl: It was warm with everyone in shorts. We were waiting for the sunset and here the sun was blocked (except on the water's surface) by clouds until..........tomorrow's photo.

The sense of scale and space is very effective...

Such a peaceful and quiet scenery.

It's nice that you provide details about some of these scenes. I find it quite interesting. I must also say that the moment this page opened up this image grabbed my attention. Absolutely beautiful. Because you framed it so well with the trees, I couldn't help but notice that 'spot' on the waters surface being illuminated by the sun.

I love the natural framing. Such a peaceful view

I'm glad this lovely place was made natural area for all to enjoy. Nice capture.

What a view that is!

A magnificent view. This is just beautiful! Beautifully framed by the tree! So peaceful!

Very nice. I like the composition with the trees encircling the scene.

Oh Steven! That is just a beautiful image - wonderful composition with delicate light!

Wonderful framing of the water and I just love its texture and subtle tone. Thanks for the information about the area as well.

nice natural framing of the moody sky and water

I would love to spend some time there.

Beautiful landscape and superb view!
The existence of that spotlight in the background is magical.