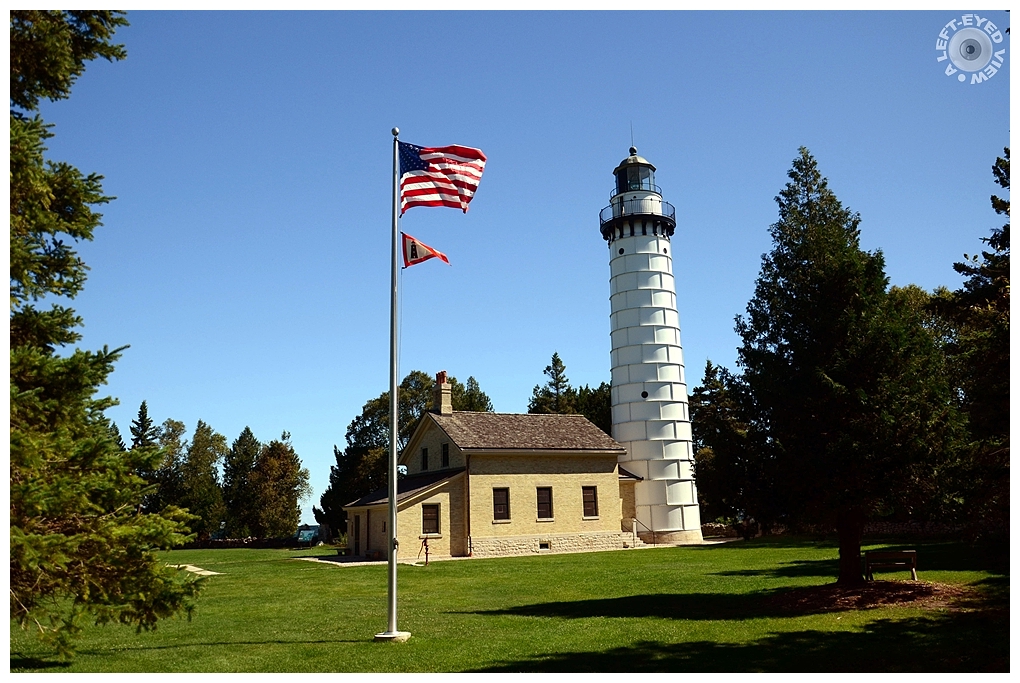 Posted by Steven (Chicagoland, United States) on 17 December 2020 in Architecture and Portfolio.

The Cana Island lighthouse is a lighthouse located just north of Baileys Harbor in Door County, Wisconsin, United States. The lighthouse was built to replace the Baileys Harbor Lighthouse in 1869 and was first lit in 1870. It is still used as an active navigational aid under the jurisdiction of the United States Coast Guard, and was added to the National Register of Historic Places in 1976.

The light itself is a third order Fresnel lens that was made in France. It used to be fueled by lard, later it was fueled by kerosene, then by acetylene, and now by electricity. The round ball at the top is the vent that removed the smoke and soot from the oil lamp. Each night oil had to be carried to the top of the tower by the keeper or his assistant to keep the light fueled. When the light first became electric in 1945, it was by an engine driven, 2 kW generator, and batteries that powered the 100 watt, 32 volt bulb. A powerline was finally installed in the 1960s, and the bulb was switched to a 110 volt, 200 watt bulb. Four bulbs are mounted in a rack that allows for the next bulb to light if the one before it burns out.

Since the 1970s, both the lighthouse and its keeper's quarters are open for visitors to tour by means of the Door County Maritime Museum. Unfortunately, because of the coronavirus pandemic, it was closed to tours and visitors, so we only got to stroll around the island, but couldn't make our way inside. This limited our time on the island as well as they could only allow so many people on the island at any given time. So my photographing was quite limited.

Interesting note. The ground around this beautiful lighthouse reminds me of the green of a golf course as it is so well maintained.

The lighthouses are interesting. There are also lighthouses on the Finnish coast that tourists can visit.

An interesting and beautiful lighthouse, the construction appears fascinating looking at that unusual exterior. A pity you could not go in but in these strange times we have to remain safe.

An excellent capture of this lighthouse and backstory to go with it. Lard power, you could fry chips at the same time :)

Excellent look at this lighthouse and great information Steven.

A fine capture of this beautiful light house. Excellent. And interesting information. :)

You have composed this beautifully.

That's a unique looking lighthouse that seems to be made of metal. The keeper's quarters looks quite lovely, too. A really good image.

Beautiful in the sunlight! I enjoyed the history behind it...I never knew lard was used as fuel. I climbed a couple of lighthouses, and I tell ya, it gives a whole new respect for those keepers.

This is a beautiful lighthouse. I love the architecture. Such an interesting history. Using lard to fuel the light was quite interesting!

That is a beautiful photo. It could be used on a postcard.

A pretty beacon with interesting history.

That would be a wonderful place to live. An excellent shot.

the first time I was there in the late 1970s, there was a gravel path with water flowing between the stones as the approach to the island. When I was there a couple of years ago, the path seemed more solid, but I don't remember the detail. This is a nice clear shot and the breeze cooperated with flapping the flags.

I have not seen a lighthouse with a pattern like that. You got a good outdoor shot even if you couldn't go inside at this time. Interesting history.

Nicely presented lighthouse. I like the composition with the flag pole. Good information as well about its history.

Gotta love lighthouses ... but I have to admit, when I think of lighthouses, Chicago is not a place I associate it with

@CrashRyan: This is located four hours north in Wisconsin. :-)

A very charming image!! Crisp, clear and colorful - they could use it for their promo pamphlets!

So glad your limited time allowed you this textbook shot on a gorgeous day, Steven. I still can't believe that after living in Madison for 4 years, we never visited Door County!

Very very good is this image of the lighthouse

Very nice with these vivid colors

Lovely image !! Thank you for the note too!!
Have a safe weekend Steven :)))

Beautiful image of the light house and interesting history. :)

Always so interesting to read your descriptions! A great picture!

I read a story once about a lighthouse keeper. Don't recall the name though but fascinating to think about what it must have been like.