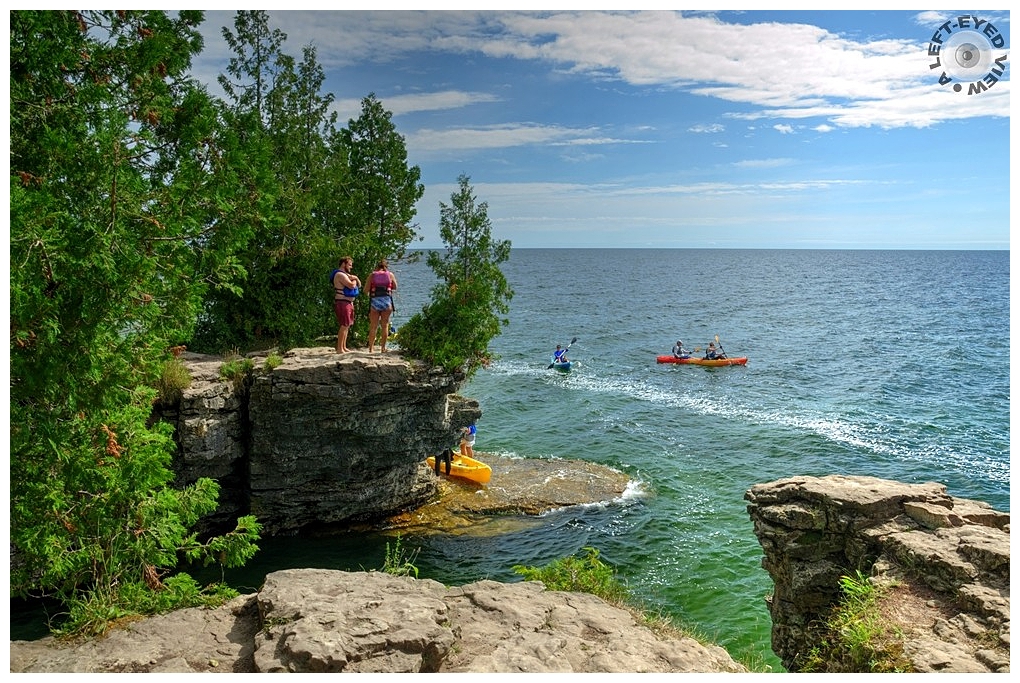 Posted by Steven (Chicagoland, United States) on 19 January 2021 in Sport & Recreation and Portfolio.

The rocks exposed at Cave Point are from the Silurian Period, a geologic time period which lasted from approximately 435 million years to 410 million years ago. During the Silurian Period, the area that is now Cave Point was located near the earth's equator. Coral reefs thrived in what was then a tropical sea. Over the millions of years throughout the Silurian Period, the remains of the marine plants, animals and calcareous sands were deposited and accumulated. These materials and the conditions that existed, followed by millions of years of compaction and chemical alteration, resulted in the formation of dolomite. This is the type of bedrock exposed at Cave Point. Cave Point is located on approximately 19 acres of land in the Town of Sevastopol.

After last year's significant rise in lake levels, you can see how much higher it is compared to the photo I captured in 2012. The outcropping ledge visible in 2012 is now just submerged below the water's surface.

An interesting history. A great place to spend time without rushing into anything.

A very nice place for swimming!

Lovely colour and view. How interesting to have the comparison shot and the geological history too

Beautiful image with the greenish water and the kayaks and people !! Lovely rocks here !! Thank you for the history :)))

What a way to relax Steven. Looking forward to the summer and a better year.

What a beautiful view! The comparison is so dramatic. Thanks for the info.

What a change from your most recent version. It all looks less welcoming for leisure too! Love all the activity here.

Nice image but not as peaceful in this image

Cave point is a beautiful landscape and a wonderful place for kayaking.

What a refreshing view. After so much confinement.

Really the water did rise quite a bit.
The place is wonderful. This lake is almost a sea.

This looks like a fun place. The color of the water is so pretty.

A place with a dash of danger, Steven?

Everything about this scene looks so inviting! Such a pretty place! I love the color of the water.

such beautiful hues in the water

A lovely view of the lake and cave point. The water level is much higher than in the past.

This is a wonderful view of the rocky features and the recreational opportunities. Sorry if I was too critical about yesterday's version, but you have redeemed yourself with this view!

this entire image really evokes summer to me. And, of course, times when we could be with others.

Oh, my the more I see of this place, the better I like it.

Terrific shot, Steven!! And thank you for the information - it sounds a wonderful spot!

Looks like a beautiful spot to spend some time.