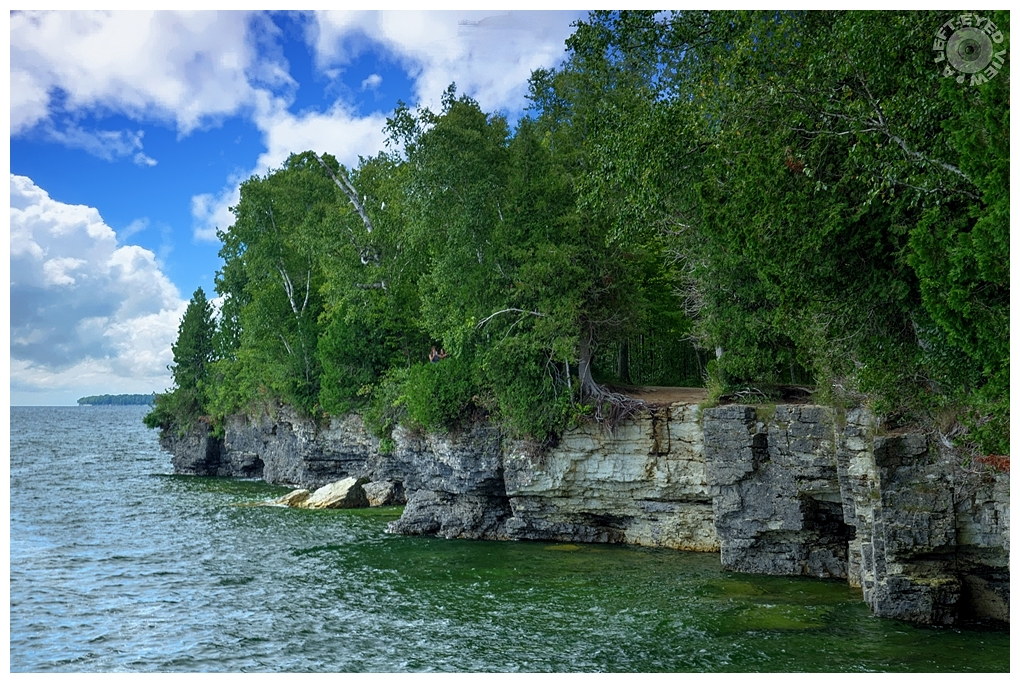 Posted by Steven (Chicagoland, United States) on 21 January 2021 in Landscape & Rural and Portfolio.

The rocks exposed at Cave Point are from the Silurian Period, a geologic time period which lasted from approximately 435 million years to 410 million years ago. During the Silurian Period, the area that is now Cave Point was located near the earth's equator. Coral reefs thrived in what was then a tropical sea. Over the millions of years throughout the Silurian Period, the remains of the marine plants, animals and calcareous sands were deposited and accumulated. These materials and the conditions that existed, followed by millions of years of compaction and chemical alteration, resulted in the formation of dolomite. This is the type of bedrock exposed at Cave Point. Cave Point is located on approximately 19 acres of land in the Town of Sevastopol.

Really a beautiful composition an place too

Does this stretch for some miles, Steven?

What a fascinating view into the geology. Love the trees just hanging on there...

Nice view and very interesting that the sedimentary layers have remained in the plane that they formed with no folding, leaving a perfectly level pavement.

Beautiful composition along these sharp rocks .

Aw!! This looks enchanting !!!!I love the colour of the water here and the ripples !

A super view of the rocks, water, and sky. Those rocks are so cool.

This is such a rugged shoreline.

lovely - this has great landscape colors in the rocks, trees and sky

That is a great shot of those absolutely stunning rocks faces.

A beautiful view of the rocks. I love how the trees grow right to the edge. The information you provided is just so interesting. Amazing to think that this was located at one time near the equator.

Just when you think it couldn't get better, it does!

Amazing what nature can do ... that rock looks like it was carved

Awesome coastline, never seen that kind of nature made border...

Being a dog guardian, when I see that lovely trail within the trees, I envision walking along there with my dog and if the dog were to be off-leash she could so easily, and unknowingly, accidentally fall off that cliff into the water. But I'm sure the area is likely a place where pets must be on-leash. whew. Crazy the things that come to mind! :-)

Thanks for the geology lesson.
All of these corners are magical. From apparently well maintained in nature point of view.

Superb place. Amazing how many years have passed.

What a great seascape

Gosh, between the land and the sea is so pretty.