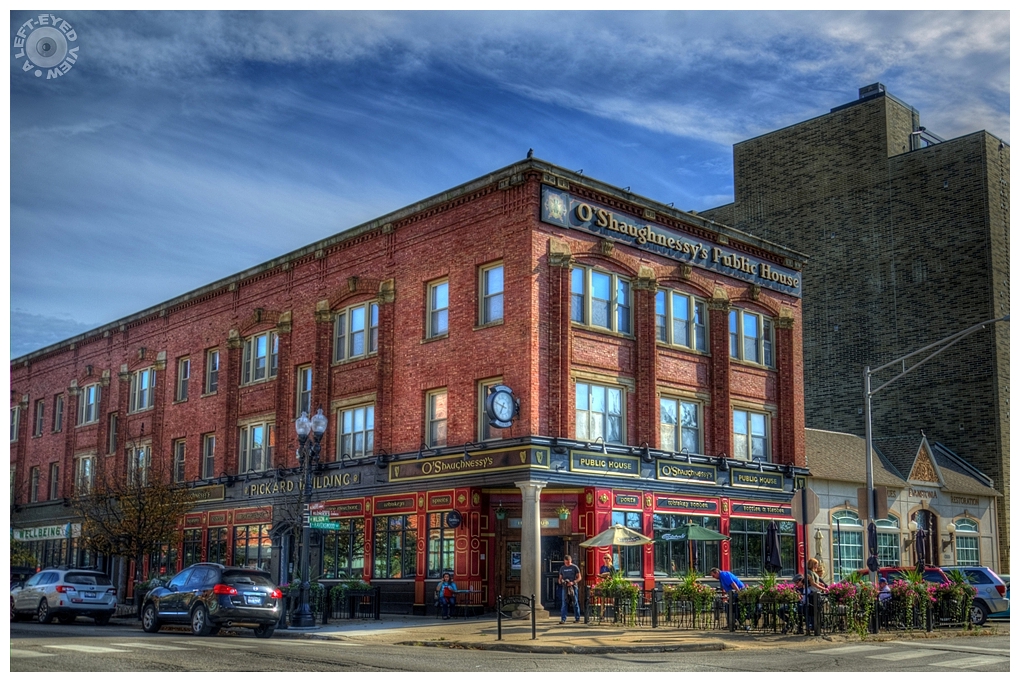 Posted by Steven (Chicagoland, United States) on 2 March 2021 in Food & Cuisine and Portfolio.

O'Shaughnessy's Public House is the Ravenswood neighborhood hangout. Open since April 2008, the authentic Irish pub is a comfortable place where everyone is welcome to relax, enjoy a great meal or refreshing drink and have a good time.

The southeast corner of Wilson and Ravenswood is forever tied to Chicago history, including at least two area legends. The Pickard Building was built by Pickard China in the 1890's to house the artists who hand painted the imported white china stock. These artists hailed from England and elsewhere in Europe. Foreman Brothers Bank were located in the building in the 1920's. The firm held the mortgage loan note of Albert "the sausage king" Luetgert, who was rumored to have disposed of his wife in his sausage works. More recently the building housed the Zephyr Ice Cream Shop. The Ravenswood Industrial Corridor as a whole has given birth to a number of world class companies: Abbott Labs, Bell and Howell, Deagan Musical Instruments and others. In recent decades the housing surrounding the corridor was rejuvenated. Now the area is dense with workers as well as residents.

The Ravenswood corridor was crying out for a local hangout, a comfortable and affordable place to meet with friends and relax. Now located in the historic Pickard China Building, O'Shaughnessy's Public House is a friendly neighborhood pub where everyone is welcome to enjoy great food and drinks in our traditional Irish setting. O'Shaughnessy's is open seven days a week for lunch, dinner and breakfast on weekends. The affordable menu features both healthful and hearty Irish and American fare; we have a few vegitarian or vegan options. There is also a children's menu with fun food such as Bangers and Mash, as well as Fish and Chips, Toasted Cheese Sandwiches and Burgers. We stock imported soda pop, Club Lemon and Club Orange and offer an assortment of Irish/English Crisps (potato chips).

Beautiful building and framing. I like your process too. Thank you so much to the note
https://laphotoselonmoncoeur.wordpress.com

An interesting house. Thanks for letting me know what everything is there.

A very fine building with a very interesting history, some of it horrific. I would like to go there for lunch

I hope they paid you a fee for this excellent promotional image and copy :)

You have made my day Steven. A great look at the Irish Pub. Because of the travel restrictions I can't get back to my home and favorite pub back in Roscommon. Excellent image. 5*

What a lot of history in that building. I had never heard of the sausage king...but there was a murder near here where someone was killed and they tried to dispose of the body by feeding it to the pigs.

IS this HDR? Ot looks so detailed and full of color. Beautifully done

@Ruthiebear: Indeed it is. You can usually find "hdr" as one of the tags listed with the photo if it is.

Nice processing. There is interesting history in this photo.

Really nicely shot and the processing gives it an almost painterly feel.

this has a very soft, rich feeling. well done, and I appreciate the history lesson.

Another fine looking building. I am not a huge fan of HDR style processing but there are cases when it can work well and I like your treatment of this image. Lovely detail all around and great colour tone of the building itself.

This is a gorgeous image. I love how the building has been repurposed and it has such an interesting history. That looks like a great place to visit!

A beautiful shot of this grand old building. It looks to be a great spot.

Your treatment is excellent. Splendid.

A beautiful building.
I have always found brick buildings to be very beautiful.

Such a beautiful old building. I love that it's become such an integral part of the community. Very interesting reading about it. Thanks for the research.

Beautiful shot of this old building. And interesting history. Superb. :)