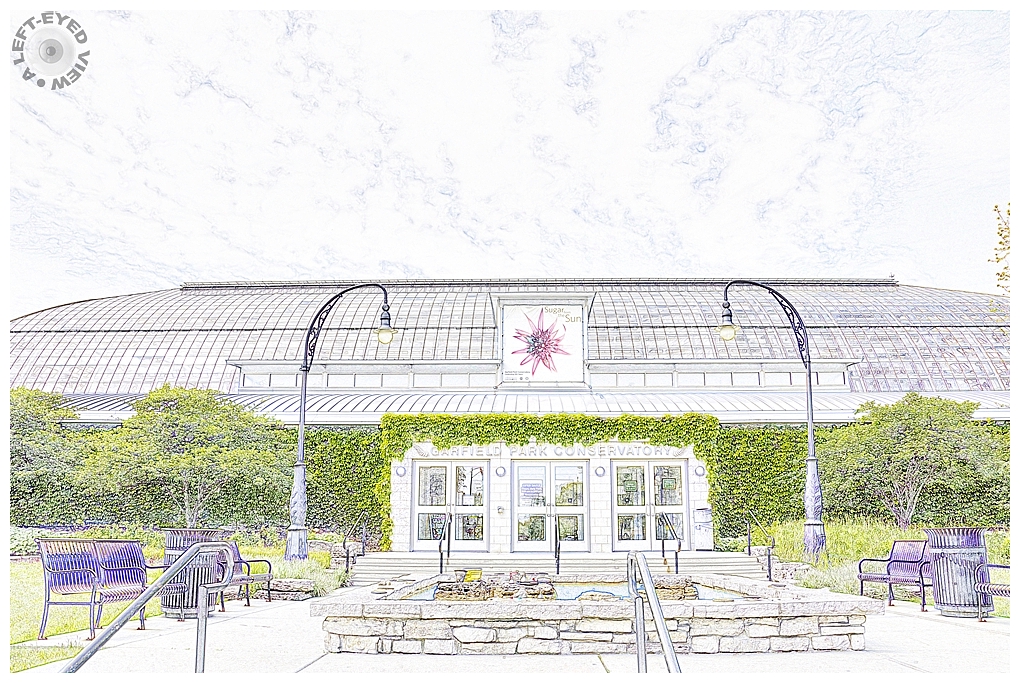 Posted by Steven (Chicagoland, United States) on 3 March 2021 in Architecture and Portfolio.

Jensen conceived the Conservatory as a series of naturalistic landscapes under glass, a revolutionary idea at the time. The simple yet strong shape of the structure, which is meant to emulate the haystacks of the Midwest, complements the collection of plants and foliage that it houses.

After many decades of neglect, the conservatory underwent a multi-million dollar restoration in 1994. The non-profit Garfield Park Conservatory Alliance formed to help maintain the structure and provide programs and services for visitors.

In a hailstorm on the night of June 30, 2011, the Conservatory suffered catastrophic damage to glass in showrooms as well as production houses where plants are grown or stored. Five showrooms contained laminated glass and therefore sustained less damage. Some areas were reopened to the public on July 3, 2011.

An interesting, slightly different way to process an image. One could imagine being drawn.

How fun, Steven, to get artsy with such a landmark.

Very nice drawing of this building

You have made an excellent architectural drawing of it

Excellent result with this image Steven.

Lovely depiction of the image !! Very very creative.
And Thank you so much for the History. Makes a very interesting reading too!!!

A beautiful presentation. How sad to hear of the damages.

I so would love to visit this place. I want to remember to Google it when on computer.

Like this rendition very much. It's quite true to it's concept...resembling the shape of a haystack

A beautiful place. I love the architecture. I am so glad that it was restored after so many years. I love this pencil drawing effect!

A beautiful image with this interesting processing.

I can imagine the damage of a hailstorm. That must have been devastating. Nice use of filters.

Very cool processing of that lovely shot. I like the balanced composition.

lovely "blueprint" processing. I have not been there for decades.

I really like your processing... reminds me of an architects drawing! Very sad about the damage in 2011.

What a shame about all the damage incurred. I bet it's an absolutely ideal place for taking photos.