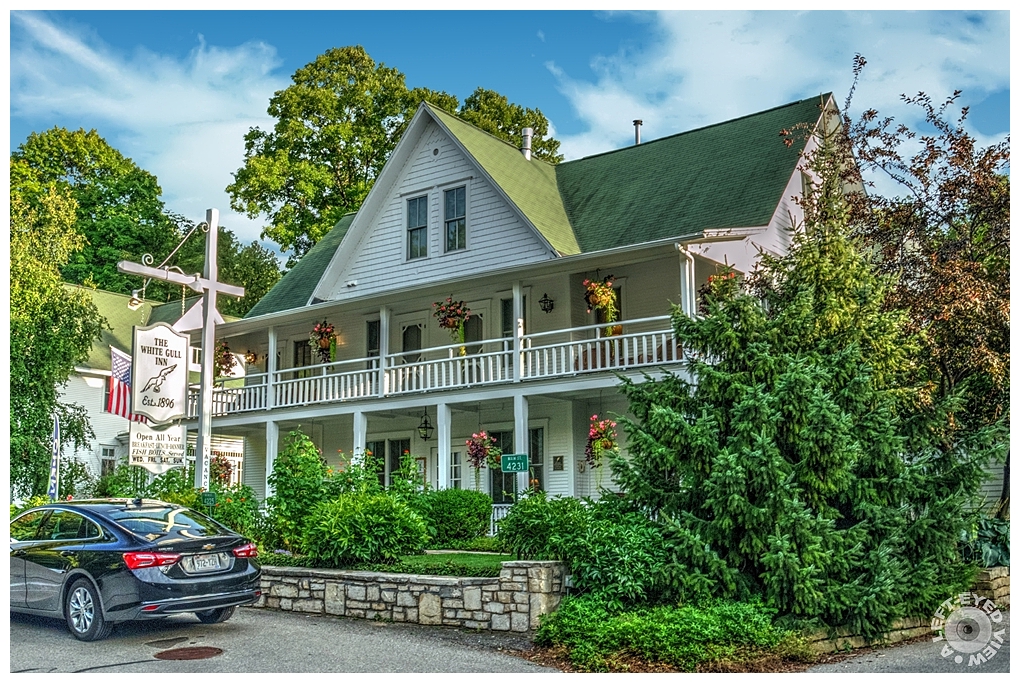 Posted by Steven (Chicagoland, United States) on 4 March 2021 in Business & Industry and Portfolio.

Some things get old, while others get better with time. There’s no doubt about the category in which Fish Creek’s jewel, the White Gull Inn, belongs. At age 124, it still reigns at the end of Main Street, as it has since 1896. Inside, the cozy warmth of the early American décor continues to charm diners and houseguests.

When Herman Welcker of Milwaukee brought his family to vacation in Fish Creek in the mid-1890s, he found a bustling village whose primary business was shifting from fishing to summer tourism. The only housing for those visitors was a boarding house owned by Asa Thorp, the village founder.

Like many tourists today, Welcker decided to stay in Door County permanently. He built what is now the White Gull Inn, named it The Henriette for his wife, surrounded it with cottages and acquired more land for a dock and a farm that produced food for the inn.

During the 1950s and ’60s, many of Door County’s historic inns were torn down or “remuddled” beyond recognition. The Henriette, even while going through several ownership and name changes, escaped that fate when Andy and Elsie Redmann purchased it in 1959. They renamed it the White Gull Inn; created a warm, early American look; and started a fish boil on a flagstone patio under century-old maple trees.

The Coulsons bought out the other partners in 1981 and began years of intensive work, creating an exquisitely restored interior inside a charming, old shell. They also acquired two houses for their staff and two more rental properties, including the historic Lundberg House, built in 1895 by Fish Creek’s first grocer.

Today the White Gull Inn – which long ago earned its place on the State and National Registers of Historic Places – has become a favored dining and bed-and-breakfast spot for generations of locals and tourists.

The property, open year-round, includes 13 two-person rooms and four cottages that accommodate from two to eight. Every room has been meticulously restored, maintained and decorated with antiques, coordinating prints and fabrics that retain the warm, turn-of-the-20th-century flavor. Amenities are strictly up to date, and a full breakfast is included in the room rate.

And then there is the famous cherry-stuffed French toast. That is what we always came for, but they were not serving during the pandemic in 2020 when we visited. It was expected, so it was not a surprise.

Very beautiful hotel in which it must be good to rest for a few days. It looks good and thank you for the explanations on its creation.
https://laphotoselonmoncoeur.wordpress.com/

If it were the carriage that was in the picture with the house...

just lovely with its porch and balcony. timber frame at its best

Looks like a great place to enjoy a drink. Excellent building.

Beautiful photo of this super inn with nature's colors !

Lovely to see this inn maintained very well after restoration..happy that the rooms are still very comfortable..
Very nicely you have given the history here..
I sure would love to have that French Toast with stuffed cherries...aw!! I am drooling here...

How cozy and inviting this looks

I love inns like this with a history and lots of character. Beautiful shot. Sorry you missed the famous cherry-stuffed French toast. It sounds delicious.

This is such a beautiful place...just now googled the Garfield Park Garden, now want to google this.

beautiful shot of this classic.

Beautiful. You certainly have wonderful building to photograph around there.

Such a beautiful place and so old. I'd like to try the French toast. ;-)

Such a beautiful inn! It is just so inviting! It has quite an interesting history. I am glad that it didn't go the way of other inns. I would love to stay there. This is such a charming image.

Superb building presented with excellent detail for us to admire.

Indeed in this building, the older the more beautiful.
Great and inviting hotel to see

I know I've said this before but I really appreciate when people have the vision to save and maintain properties like this. The White Gull Inn is a great name but it does look a bit like a Henriette! I would love to enjoy a meal there.

A fine capture of this beautiful old inn with lovely details. Thank you for the interesting information. Excellent. :)

Such a really wonderful old home! But looking as fresh as a daisy - well loved, obviously!! Thank you for all that information!

it reminds me of Eureka Springs, Arkansas