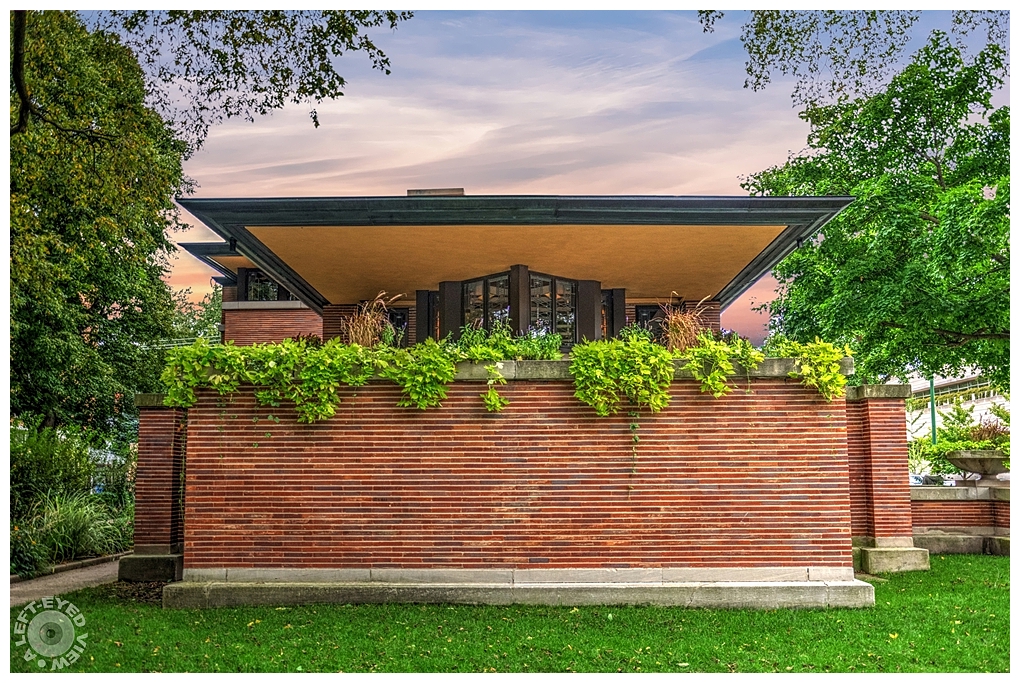 Posted by Steven (Chicagoland, United States) on 16 March 2021 in Architecture and Portfolio.

The side elevation of the Frederick C. Robie House. The Robie House is a U.S. National Historic Landmark in the Chicago, Illinois neighborhood of Hyde Park at 5757 S. Woodlawn Avenue on the South Side. It was designed and built between 1908 and 1910 by architect Frank Lloyd Wright and is renowned as the greatest example of his Prairie style, the first architectural style that was uniquely American. It was designated a National Historic Landmark on November 27, 1963 and was on the very first National Register of Historic Places list of October 15, 1966.

The projecting cantilevered roof eaves, continuous bands of art-glass windows, and the use of Roman brick emphasize the horizontal, which had rich associations for Wright. The horizontal line reminded him of the American prairie and was a line of repose and shelter, appropriate for a house. The exterior walls are double-wythe construction of a Chicago common brick core with a red-orange iron-spotted Roman brick veneer. To further emphasize the horizontal of the bricks, the horizontal joints were filled with a cream-colored mortar and the small vertical joints were filled with brick-colored mortar. From a distance, this complex and expensive tuck pointing creates an impression of continuous lines of horizontal color and minimizes the appearance of individual bricks.

The design of the art glass windows is an abstract pattern of colored and clear glass using Wright's favorite 30 and 60-degree angles. Wright used similar designs in tapestries inside the house and for gates surrounding the outdoor spaces and enclosing the garage courtyard. The planter urns, copings, lintels, sills and other exterior trim work are of Bedford limestone.

Nice modern architecture. I really like its red bricks, bricks always bring a lot of warmth to homes or buildings.
https://laphotoselonmoncoeur.wordpress.com/

Great architecture. Like the greenery coming over the wall.

A beautiful capture of this elegant building.
Although you state that it is uniquely American, from this viewpoint it evokes a feeling of Japanese architecture to my mind.

@grouser: I can definitely see that. And you'll see more influence tomorrow.

Another to google...do you realize how often you send me off to Google with something you post?

Great point of view for this fine photo of the historic Frederick C. Robie House.

I thought I recognized FL Wright's style. What a beautiful viewpoint

Beautiful example. I visited FLW's house in Oak Park in the mid 90s and saw the other buildings of his in the neighbourhood. Believe it or not I'm currently wading through his autobiography, which is a hefty book but very interesting, he has a unique style in writing too!

It's a beautiful house. I like that kind of architecture.

Absolutely beautiful. His houses evoke such peace and elegance. I love the architecture. Beautifully photographed.

Photographed from a beautiful point of view.

A gorgeous image of this amazing architecture.

Wright was so far ahead of his time... this is amazing! And well shot.

His style is so recognizable right away. After reading this it becomes apparent just how incredibly expensive this house would have been to build. A beautiful home and makes a fine photo as well.

I recognized FLW's work the moment the image opened! I LOVE his work! I like your POV and the symmetry in the frame!

Great architecture and interesting information as well that provides excellent context to the photo.

The architecture is made even more striking with the green leaf contrast.