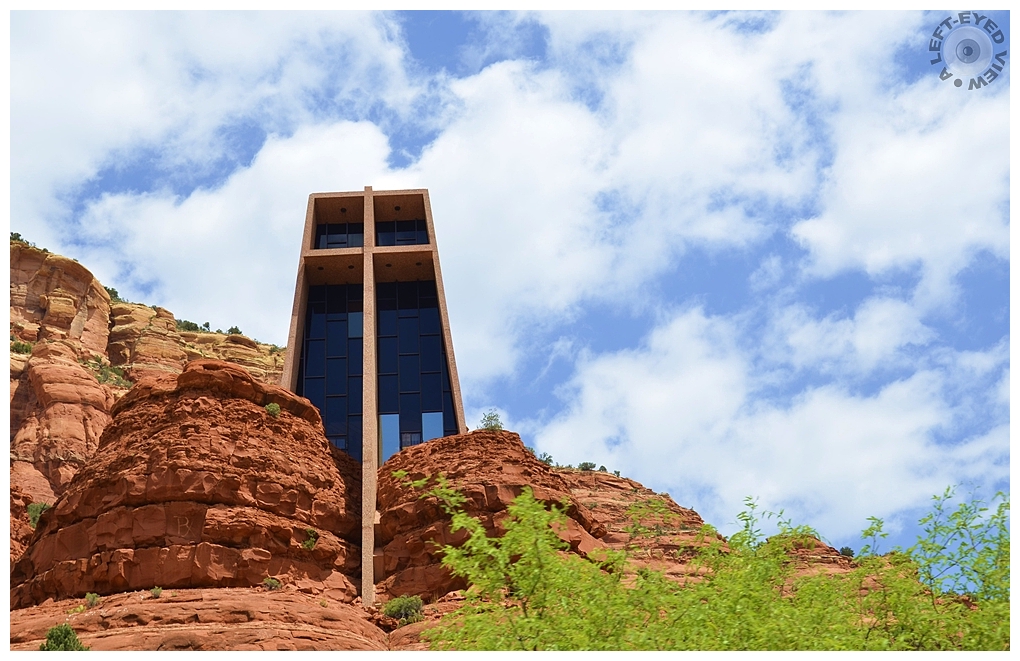 Chapel of the Holy Cross

Posted by Steven (Chicagoland, United States) on 22 March 2021 in Architecture and Portfolio.

The Chapel of the Holy Cross is a Roman Catholic chapel built into the mesas of Sedona, Arizona, which was inspired and commissioned by sculptor Marguerite Brunswig Staude. Richard Hein was chosen as project architect, and the design was executed by architect August K. Strotz, both from the firm of Anshen & Allen.

The chapel is built on Coconino National Forest land; the late Senator Barry Goldwater assisted Staude in obtaining a special-use permit. The construction supervisor was Fred Courkos, who built the chapel in 18 months at a cost of $300,000. The chapel was completed in 1956.

The American Institute of Architects gave the Chapel its Award of Honor in 1957. In the sculptor's words, “Though Catholic in faith, as a work of art the Chapel has a universal appeal. Its doors will ever be open to one and all, regardless of creed, that God may come to life in the souls of all men and be a living reality.” In 2007, Arizonans voted the Chapel to be one of the Seven Man-Made Wonders of Arizona.

Believe it or not, Steven, I made one of the most important decisions of my life while sitting inside this chapel looking out back in 2008. As one of the spiritual vortexes of the area, I'll never forget it.

Quite astonishing this modern chapel wedged between big rocks. The colors are superb and thanks for the explanations Steven
https://laphotoselonmoncoeur.wordpress.com/

It couldn't have been easy getting the materials in place here. What an achievement

Superbe POV, one can almost not believe it dates from the 50's last century.
Amzaing place for contemplation.

This is a very special chapel, but beautiful

This is a change from the roman art of the old churches ....
It is a bit disturbing in such a natural site!

Striking minimalism in great contrast to the complexity of the eroded rock. Great capture

WOOOOOOOOOOOOW
AMAZING
Thanks for sharing

Impressive architecture among these rocks!

What a view it must have...

have a nice day.

This architect managed to turn it into something very beautiful!
You have taken a wonderful position.

Thank you for the History..
This chapel wedged between those awesome rocks...looks great!!!

Beautiful chapel. I have often thought and wondered why there are so monenöaisia ways to believe in one God.

A perfect and interesting photo of this modern chapel from the year 1956.

Fantastic piece of architecture, so impressive.

Looks strange in this landscape. But even cool and futuristic.

A beautiful capture of the chapel and red rocks.

Wow, what a cool place

Strange as it would seem, the construction seems to fit in the landscape.

nice angle on this beautiful structure. if it wasn't so dry, i would love to live near the red rocks

The architecture is gorgeous. The chapel almost just seems to be a part of the landscape. A gorgeous image.

Now that's a familiar sight to me! You had a gorgeous sky for the background for this unique chapel!

That is impressive bit of architecture and interesting way of combining natural landscape with man made construction. Nicely presented and photographed.

What an incredible building for its location. I would imagine simply because of the location itself, it must be a powerful presence for those who see it and are fortunate to be inside. We spent a few days in Sedona a long time ago and I'm surprised no one mentioned this building. I would love to have seen it.